Experience some of the many things Chicago has to offer by participating in some of the exciting tours.

​Rt. 66 Driving Tour
The iconic Rt.66 has so much American history.  Join us for a very small but enjoyable sample of the Mother Road as we journey to the charming town of Pontiac, IL.  Along the way, we’ll stop for a tour of the equally iconic Joliet Correctional Center, opened in 1858.  Other stops will include vintage Stardard Oil and Texaco gas stations  In Pontiac, you’ll have a chance to visit numerous different museums including the Illinois Rt.66 Hall of Fame & Museum, Livingston County War Museum, Gilded Arts Museum, and the Pontiac-Oakland Automobile Museum and Resource Center.  Lunch in Pontiac is included.
​Klairmont Kollections
Larry Klairmont’s collection of cars is a magnificent showplace consisting of over 300 of the most stunning, impressive, and clever vehicles any car enthusiast could ever hope to see during their lifetime. All of this under one roof, encompassing 100,000 square feet on two floors. During his lifetime Larry was able to amass hundreds of classic and unique cars.  SOLD OUT.  CHECK BACK FOR POTENTIAL OPENINGS LATER.
​Chicago Vintage Motor Carriage
Home to The Richard H. Driehaus Collection, Chicago Vintage Motor Carriage is home to this prestigious collection, which showcases the best of American Automotive design and engineering from the Classic and Post-War eras.
Chicago Vintage Motor Carriage is a full-service car dealership and vintage car market specialist that buys and sells cars.
The Chicago Vintage Carriage Collection consists mainly of classic vehicles from the 30’s and 40’s. The highlight of this collection is an all original 1948 Tucker Sedan.
Cantigny Park (can*TEE*nee or can*TIG*nee)
While many people call the park can-TIG-nee, the proper pronunciation is Can-TEE-nee. The word is French and the ‘g’ is silent.
Robert R. McCormick, born in 1880, lived on the grounds from the 1920s until his death in 1955. Cantigny is open to the public and part of the Robert R. McCormick Foundation, a nonprofit public charity based in Chicago. It was named after a small village in France, where Colonel McCormick commanded an artillery battalion in 1918 as a member of the U.S. Army’s First Division. The Battle of Cantigny was America’s first victory in World War I. Robert R. McCormick died in 1955 at age 74. His will established the Robert R. McCormick Charitable Trust and designated Cantigny as a public space for education and recreation. This extraordinary gift, now part of the McCormick Foundation, enriches our community every day and is enjoyed by more than 300,000 visitors each year. Cantigny Park opened to the public in 1958. It is home to:
The Robert R. McCormick Museum, a historic house museum interpreting the life and legacy of the Colonel. The mansion reveals the public and private sides of one of America’s wealthiest and most philanthropic families. Note: the museum is currently under renovation and will reopen in 2022.
The First Division Museum, dedicated to the history of the “Big Red One,” the famed 1st Infantry Division of the U.S. Army. Many exhibits are interactive and all of them provide fascinating insights about America’s military, past and present.
Cantigny Gardens, created in 1967 by renowned landscape architect Franz Lipp. Nearly 30 acres of display gardens, theme plantings and statuary render exceptional beauty in all seasons.
Visitors Center, featuring a popular scale model of the estate, 100-seat theater with welcome film, Le Jardin at Cantigny Park (for banquets and weddings), Bertie’s Café and the Cantigny Shop.
​Walking Trails (nearly 3 miles) and spacious Picnic Area.
​Architectural Boat Tour
Experience the city’s legendary architecture from the best seat in the house—the river. Our experienced tour guides detail the 130 year long history behind the skyline, while our bartenders and staff keep you comfortable and entertained. This comprehensive tour navigates through the heart of the city on all three branches of the Chicago River. It’s the one thing everyone tells you to do in Chicago, done right. Your boat includes; An expert tour guide that’s never boring, always entertaining. Accessibility, everyone should be able to enjoy our tours. Drinks & snacks. A Full-service bar with wine, local beer, and craft cocktails, as well as an assortment of snacks, all for purchase. And of course…a restroom! 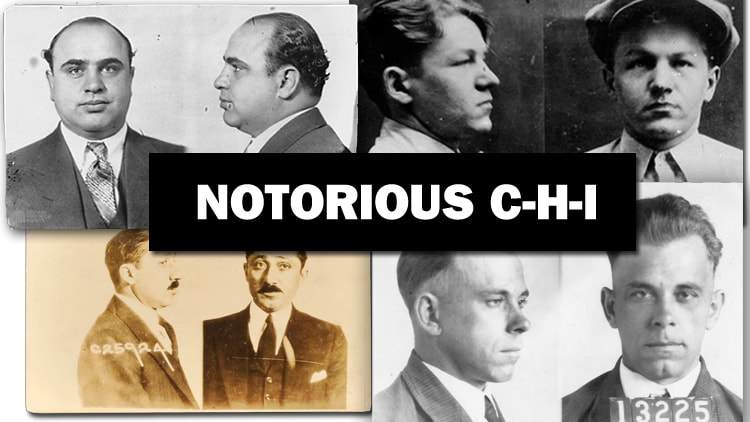 Chicago Gangster Bus Tour
Chicago’s Original Gangster Tour has been providing a top-notch educational and historically accurate tour for over 30 years!
The guides present an accurate account of the crimes and activities that were going on in Chicago during the 1920’s and ’30’s (Prohibition). You will hear the exploits of Capone, Moran, Dillinger and the rest of the boys on this unforgettable Chicago crime tour! Guests remain on the bus for the duration of the tour. Some sites included are the St. Valentine’s Day Massacre, the Biograph Theatre, and the Holy Name Cathedral. The tour is educational yet fun. The Gangster Guides are professional actors and bring the world of Prohibition and the 1920s to life. Our Untouchable Tour Gangster Guides take on the persona of gangsters and mobsters and will bring the tour to life!  SOLD OUT.  CHECK BACK FOR POTENTIAL OPENINGS LATER.
​Frank Lloyd Wright Home and Studio
In 1889 Wright completed the construction of a small two-story residence in Oak Park on the Western edges of Chicago. The building was the first over which Wright exerted complete artistic control. Designed as a home for his family, the Oak Park residence was a site of experimentation for the young architect during the twenty-year period he lived there. Wright revised the design of the building multiple times, continually refining ideas that would shape his work for decades to come. Frank Lloyd Wright used his first home to experiment with design concepts that contain the seeds of his architectural philosophy. In his adjacent studio, Wright and his associates developed a new American architecture - the Prairie style. Trained interpreters offer insights into Wright's family life and architectural career during this 60 minute tour.
​Rialto Square Theatre
Tour the magnificent Rialto Square Theatre, The Rialto is often referred to as the “Jewel of Joliet,” and widely considered one of the ten most beautiful theatres in the nation. The building reflects Greek, Roman and Byzantine architecture. You’ll take a walk through the Esplanade, or inner lobby, designed after the Hall of Mirrors in the palace of Versailles near Paris. You will view the Rotunda, surrounded by 18-Corinthian-style columns and surmounted by a dome very similar to the Pantheon in Rome. And you’ll even go on stage and visit the green room! After the tour sit back and delight in an organ concert in the breathtaking auditorium
​White Fence Farm Dinner & Game Night
White Fence Farm, a unique country restaurant specializing in fried chicken dinners, opened in the early 1920’s along Rt.66.  This facility started life as an actual farmhouse, but has expanded dramatically over the years, and can now seat over 1,000 people at a time in one of many different country themed rooms.  Amongst the country décor are collections of antique cars, model trains, grandfather clocks, bicycles, coin operated machines, and much more.  Once you feed yourself, you can go outside and feed the farm animals in the petting zoo.  Dinner includes family style servings of kidney bean salad, pickled beets, cottage cheese, cole slaw, and corn fritters for appetizers.  Individual main dinner plates include a baked potato and ½ fried chicken as well as vanilla ice cream for dessert.  Coffee, tea, or milk is included.  After dinner, games and trivia will provide entertainment for all, and the opportunity to take home some prizes.